In the past 5 years I have done my fair amount of interviews as a writer. And I like to do them! It’s nice to tell people about your work and to show them a little bit who you are behind the books.

Most of the interviews are through e-mail or chat, it’s easy for both parties and I like to think a bit about the answers I want to give.

Last year, I also have had an interview on the radio which was a lot of fun! 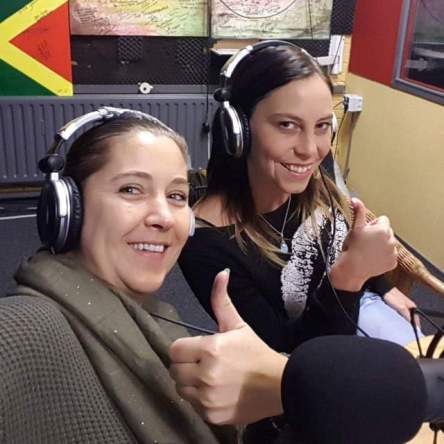 A bit scary at first, I don’t really like the sound of my own voice hahaha!

But not as scary as being interviewed on stage while you are being filmed as well.  Some people may be born for the spotlights, for me it’s quite frightening to go on stage in front of an audience.
Thanks to Bart, presenter of the show, I think that I managed pretty well and even had fun doing it. Sure was a memorable experience!

Most of the interviews I do are in Dutch, because I am a Dutch writer after all. I did, however, an interview in English for The Heroine’s Journey. 🙂

You can read that one right HERE.

Besides giving interviews, I also like to interview my fellow Dutch writers for my YouTube channel. I don’t see them as rivals because people don’t just read one book. I like to see them as colleagues and have a lot of fun learning about them and their stories.

Giving interviews is an interesting part of being a writer, especially because I never really gave it any thought before my first novel was published. I wrote a book and it would be great if people would read it. But giving interviews and all that? It never even crossed my mind to be honest. You could say that I learned much in the past five years! 😉 There’s a lot more to the job than meets the eye.